A breathing exercise for helping our development in spirituality

In early January 2010 I was asked a question with a request for Divine Guidance on it:

'What kind of breathing technique is best and recommended from the Divine perspective to use that would support our development in spirituality, increase the stream of the Divine energy through the chakras, provided that we work additionally on the cleansing of our karma and lead a righteous and truthful life?'

The Great Divine Director answered the question by describing the breathing exercise below and recommended carrying it out only in a clean place in nature when we are high in vibration and have our consciousness elevated to the maximum. Also, before we start the exercise, to invoke the Forces of Light for help and say what we would like to enhance by doing it.

On 6 January 2011, Lord Alpha in his Recommendation told us how to balance our energies – through gratitude, labour and food, and one of the types of food was the prana in the air.

Lord Alpha instructed that it is advisable to go outside the house and do this breathing exercise at dawn just before the sunrise, to absorb the prana well and as fully as possible, while filled with Divine Love we heartily thank the Father One. Then the prana in the air becomes food for all our bodies for the whole day. Additionally, are enhanced the Sun feeding and the processes of transformation of our lower bodies that occur during the sungazing at sunrise and the whole day afterwards. 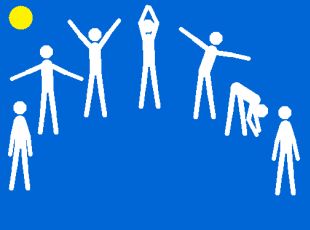 Description of the breathing exercise:
Starting position – standing upright facing the east with legs slightly apart, arms next to the body with palms facing it.
Slowly raise your arms, stretching them to the sides until they reach the position of 'ten to two o’clock' or your body forms the letter Y.
While raising your arms, inhale through the nose, and when your arms are open over your head in the form of the letter Y, your palms facing each other, exhale through the mouth. When inhaling, say in your mind 'AMEN'.
Then, do three cycles of inhaling through your nose and exhaling through the mouth, leaving your arms up in the same position. Each time you inhale, say in your mind respectively:
First inhaling – 'TAKKA'
Second inhaling – 'DA'
Third inhaling – 'BUDDEH'
Then, inhale through the mouth while your arms continue to be raised until the fingers touch over the head and say silently 'OM   ' Then, exhale through your mouth again, lowering your straight arms in a semicircle on the sides of the body, and bend slowly forward until the fingers of both hands are joined together.
In this position, bent down to the ground, we say out loud if possible: 'Thank You Lord!' with all the gratitude we are capable of at that moment. Finally, we slowly straighten up and go back to the starting position with arms next to the body.
All this is a cycle that is repeated seven times one after the other.